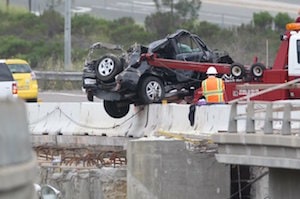 San Diego Union Tribunes Debbie Baker and Susan Shroder reported that several members of a family were injured, one fatally in a car accident on April 25, 2012. The tragic auto accident happened at around 6:30 a.m. on Interstate 805 in Sorrento Valley as the Thomas family was on their way to Disneyland. According to CHP Officer Art Athans, an unnamed woman driving a Nissan Altima stated that the driver of a Honda sedan cut her off and as she swerved to avoid it, she hit the Thomas Toyota Rav4 causing it to roll several times and come to rest hanging 30 feet above a Caltrans work site.

The Rav4 driver, 43-year-old Brian Thomas sustained multiple cuts, bruises and broken ribs. His wife Rebecca, 42, who was sitting in the front seat, was also injured. Their 22-year-old daughter Daniesha and 8-year-old son, who were in the back seat, received multiple injuries including cuts and bruises. However, their 66-year-old grandmother suffered a major traumatic brain injury. The family was rescued by construction workers and taken to a local hospital, where the grandmother later died from her injuries.

Our sympathy goes out to the Thomas family for their loss.

The driver and owner of the Nissan and the Honda, if they can be identified, would be liable to the Thomas family for violation of Vehicle Code Section 21658, which requires the drivers to remain within a lane until it is reasonably safe to move from their lane. In this case, the accident occurred when the driver of the Honda allegedly cutoff the Altima forcing its driver to swerve to avoid the Honda, which would constitute unsafe movements by both drivers . All responsible parties would be jointly and separately responsible for any property that was damaged as well as the personal injuries sustained by the Thomases and wrongful death of their mother /grandmother (see my prior Blog post Bonsall Auto Accident Kills Escondido Man And Passenger for Wrongful Death Law in California). As heirs the Thomases would be entitled to claims for both their injuries as well as the death of their mother/grandmother. As in most cases involving serious injuries and death, adequate insurance coverage and assets of the responsible parties are of concern. However, the fact that their vehicle rolled over could give rise to potential products liability claims (see my prior Blog post San Diego DUI Auto Accident Kills One And Injures Two In Mission Valley California Products Liability law ).