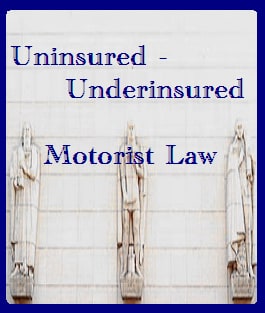 In these challenging economic times more and more people are either uninsured or substantially underinsured. This legal guide provides an explanation of different coverage's and how they affect the legal rights of injury victims and their family members.

1. What is Uninsured/Underinsured Motorist Coverage?

Uninsured Motorist coverage is first party insurance coverage that can be purchased to protect the insured, any resident relative, minor children, or children away at school, who sustain damage or injury in an auto accident caused by someone who did not have liability coverage. As a general rule one would have to purchase separate coverage for their vehicle (UM-PD) and for bodily injury (UM-BI).

Underinsured Motorist coverage is first party coverage that is usually included when Uninsured Motorist coverage is purchased. This type of coverage will protect the above insured's, who sustain bodily injury in an accident that is caused by someone who carries liability insurance that is inadequate to compensate the injured party. In addition, this coverage does not cover damage to property thus, adequate collision coverage limits are needed to fully compensate any such loss. In California, insurance companies are required to include such coverage unless declined in writing.

Many people are familiar with umbrella policies, which provide additional liability coverage above and beyond their auto or homeowner liability limits. In states such as California, some insurance companies offer Underinsured umbrella policies. This first party coverage affords the insured the ability to bridge the gap if the responsible party has inadequate liability coverage in various situations such as injuries arising out of auto or homeowner claims. This coverage also can provide additional protection if the insured's Uninsured/Underinsured Motorist limits are not adequate to fully compensate them for their injuries.

Uninsured Motorist claims require that there be actual physical contact with another vehicle. In addition, UM-PD claims require that the uninsured driver's identity be ascertained before any such claim is honored. In cases of hit and run, insurance policies as well as state laws generally require that the police be notified and a report made within 24 hours of the incident. In addition, the insurance carrier must be notified within 30 days. Establishing uninsured status of the adverse driver is usually done by obtaining a certificate from the DMV known as an SR-19 in California. Obtaining a declaration under oath from the adverse driver and registered owner of the vehicle, or a declination of coverage from their insurance company is usually sufficient.

Uninsured/Underinsured claims are first party claims, the claimants insurance company steps into the shoes of the responsible party. This means that the insurance companies' interests are adverse to that of the insured. If any claim can not be resolved amicably either side can demand arbitration. This starts the litigation process however, it is done outside of court. Both sides have the right to conduct discovery such as propounding interrogatories, requesting document production, and taking depositions. Then both sides attempt to agree on a neutral third party to act as an arbitrator. If both sides can not agree on an arbitrator, they can file a petition with the court, which in turn will select the arbitrator. Regardless of the arbitrators ruling, their decision is binding on the parties up to the limits of the insurance coverage.

5. How Can a Personal Injury Attorney Help

Dealing with insurance companies can be an aggravating and a daunting task. Knowing the law and required documentation can have a great influence on the final results. Furthermore, purchasing adequate first party coverage can be the difference between being fairly compensated for injuries or being left with substantial unpaid medical bills, no compensation for lost earnings, or pain and suffering. If you or someone you know have been injured by someone who is Uninsured or Under-insured the guidance of an experienced personal injury attorney is crucial to a successful resolution of your claim.